8:00 AM  I awoke to a phone call from Dominican and as I said, "Good Morning Honey"  the nurse said she had a call from Dr. Alexander.  Not fully awake, I listened as Michael proceeded to try to salve my fear and at the same time scare the hell out of me.  Tracy's heart was beating too fast and they were mobilizing and probably going to move him to the telemetry wing for more efficient monitoring.  Michael didn't want me to be unduly alarmed by this.  Oh no, not me...  I listened and tried to make sense as the hair on my neck stood straight up.  OMG!!!  What had we talked about last night... had I kissed him enough?  Had I teased him too much?  What if that were it?  NO NO NO

Vicki had called while Michael was giving me the update.  I needed to wake up.  Scared out of my wits.  I caved.  I turned on the coffee pot, drank a glass of juice and started to shake.  I tried to collect myself.  I needed to go to Tracy.  I called Linda and she said she'd drive me to the hospital.  I dressed, gathered up a bag and we left.  By the time we arrived, I collected myself... Linda kept telling me to breathe... Tracy was still in his original private room with the rapid response team.  T was on oxygen and his temperature was normal!!!!!!!  They had given him potassium and platelets and blood and God knows but his color was good, his temp was NORMAL and his heart was back to a regular beat.  T greeted me with " Guess I got your attention" and I said I needed to slap him around...  OMG!!!  With the new batteries I'd remembered for his speaker, he turned on his iPod and T was my T, sly smirk and all. 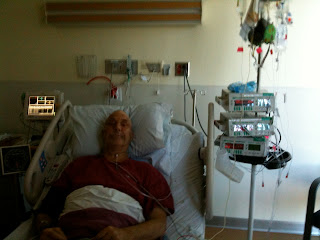 We discussed that it would be nice for him to remain in his private room but the doctors decided he needed to be in a constantly monitored room so finally they moved him.

Well, he's in great hands.  Dominican is known for being a great cardiac hospital so, I gathered up all his personal stuff as he was moved with tons of gauges to his new much smaller room in the telemetry wing and promptly got out of the way.  Much smaller room populated by lots of equipment and lots of professionals.... I needed to leave them to their business and decompress and breathe.  Vicki and Marilyn picked me up and we went off to tour properties on brokers tour...  what a treat to take me away and soon joined by Lorraine... the Fab Four prevailed... our friends are everything in this life... love and friendship make our trip worthwhile... I looked a fright with my hair cowlicks strutting their stuff and my UGG wannabes but no one cared as we viewed many properties and gradually I came back down to terra ferma... home to Riley and collapse...checked in with my honey and he was resting...all was well.. dare we hope that he can come home soon?   no nap but sweet rest until Linda called to say dinner was ready.  We are so blessed!!! Lots of wonderful remembrances of times past... home to another call to T and a bubble bath with Riley hovering...  I want my T and he'll be coming home soon...he's a fighter and he WILL BEAT THIS THING!!!
Posted by AnneMarie at 12:13 AM