As Hurricane Sandy hits the East coast, we watch the news hoping that the worst is not too much to bear.  Johnny is safe and I hope the rest of our family in Florida and Connecticut friends are also safe.  Maren is posting to Facebook and we're hoping she's safe at home in North Beach, Md.  And there are still people who don't believe that our climates are changing.....

We've been rolling with the ups and downs a lot lately... I've been trying to stay positive throughout Tracy's many mood changes wrought by aches and pains the result of way too many Neupogen shots and who knows what else....  The communication breakdown between Bruno at Stanford and Dr. Wu's office in Santa Cruz is the latest debacle...  After much discussion where we've acknowledged no one will concede their error, Tracy was the victim.  T had started having his mid month labs done back in Dr. Wu's office.  T's counts had been on the low side lately and we'd accepted that that just may be what's normal for our T.  Well, Dr. Wu's office isn't used to that and apparently, altho' they are supposed to be on the same system as Stanford; who knows whether they are looking at the same tests? So, we received a call on the 18th from Kellye (at Dr. Wu's office) stating that she'd been told by Bruno to have Tracy start Neupogen shots...Thurs, Fri and Sat.... to drive those counts back up.  T started immediately and neither one of us questioned what the counts actually were.  Poor T started having terrible joint pains and shooting pains through his feet and cramping.  I tried to help and mostly stay out of his way. On Mon. another call came in to continue with 3 more shots.  Neither one of us questioned it altho' I became kinda suspicious... nobody had checked his labs again so why?

Well, when we saw Bruno on Fri. T's counts were very high and I asked why he'd told them to start the Neupogen.  Bruno made some excuse around his being in the midst of something else and not really being able to see T's labs.  So, I pressed the question but to no avail.  As Jim said, Bruno's never going to admit he may have been wrong.  The sad part was the fact that Tracy had to suffer through and we're back to questioning everything. We'd become complacent and we're back to being vigilant.  Perhaps thats a good thing...time will tell ... Bruno was in a talkative mood... he advised us to avoid using Dr. Wu's office and just not get the mid month labs since "they tried to kill you last year didn't they?"... reminiscing about the fact that T had survived his initial 2010 Stanford stay by cheering the Giants on to win the World Series & we were hoping that they'd repeat the victory just as T had.  Then, Bruno retorted with " you're living on borrowed time" and that he remembered a lot of tears ( that would be me ) when he gave us the diagnosis.  I've been reeling over that phrasing all weekend.  Tact, not much but we do have Bruno to thank and we continually do.  Tracy is feeling great as of Sunday... the steroids have kicked in....

Several buyers are circling and I've tried to be home in time to watch most of each of the Giants march towards their World Series win... what a series!!!  what a sweep!!!!   and the 49ers are rolling along... aren't we the happy bay area sports fans!!!

Tracy was entertaining the neighborhood kids at Sean & Bina's.....Happy Hallowe'en!!!!!!
Posted by AnneMarie at 11:57 PM No comments:

As I slowly drift into consciousness,  I choose what will give me pleasure today.  I believe that we are put here on earth not to suffer but to learn and teach and leave this world a better place... and when we find that certain something that gives us joy we must embrace it and follow it's lead....  Today will be a fun day!  We'll walk down to our beach when our alarm clock, that would be Riley, stirs us at precisely the same time  ... how does he do it, every morning at the same time?  We just roll with it...  Some days I can't accompany my boys but the best days are when we all take the stroll... the marine life is abundant ... October is a truly beautiful time of year on the coast.

Then, we come back to our morning things... mmm coffee brewed from beans and cooked oatmeal or eggs or pancakes and the papers... today we'll play with clay.  I'm working on several pieces.  A bas relief of Cenz in profile.  I'm using the photo I took in '89 at the Louvre where life is imitating art... 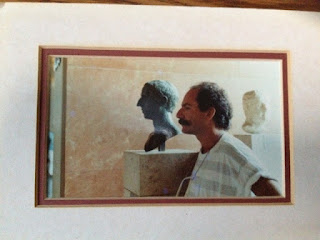 The only problem is my skill, 'tho I'm using paper clay for the first time on my otter and loving it!  It's so forgiving... I can't seem to get Cenz' eye right with the 50/50 red clay... those big beautiful expressive blue eyes... but I'll keep on trying.  I'm also working on another otter.  Can't seem to get enough of those rascally cuddlies...

I'll finish the afternoon with a listing appointment which will give me the opportunity to meet a new friend.  She was referred by Barry, the dog whisperer, at Wag More Farms.  I look forward to this glorious day!

This evening we'll cheer the Giants on to victory we hope!!!  It's their last chance... we watched and then listened to the game last evening until we arrived at the Sons of Italy meeting.  Great to see old friends and new.  We definitely participated as there was a vote to change the venue for next years barbecue from the Crossetti ranch to a place in Corralitos.  Finally after much haggling we will return to the Crossetti ranch next July.

One little back step... Tracy is back on Neupogen cause his counts are too low.  Surround our boy with love and white healing light and go out and enjoy the day!!!!
Posted by AnneMarie at 7:58 AM No comments:

I find myself writing more personal emails lately and sending notes (altho' sometimes we forget to send them )...  ah the beauty of the coast is entrancing and work has been all consuming and playing with clay has captured me yet again.  It's great to have different and yet all consuming interests.  We are very blessed.

Last Friday, Tracy, Riley and I were strolling on the beach in the most glorious early morning sunshine when we were startled from serving up the ball for Riley.  The huge pods of dolphin were all over the horizon on the waves, dancing and frolicking everywhere we looked.  All of a sudden,  the waves set up so that they were rolling in large sets and through the clear green water at the crest, two extra special dolphin surfed directly at us.  A small group of folks had gathered and we all responded with hoots and cheers of amazement... Awesome and goose pimply and blessed we were and oh so content... and shit eating grins were had by all...

Tracy has had a few more aches and pains and wrenching cramps as we wind towards his last two treatments.  After, he starts on a monthly check up at Stanford which we hope will gradually be extended to 6 weeks and then, quarterly...keep sending that healing white light to surround our T.  Amazing that the 15th of October we passed the two year anniversary of his diagnosis and his first Stanford stay.  We've survived... hoping for the best and trying not to worry.  Remission is a heavy state.... And the Giants are in the playoffs once again!  That distraction got us through the first time around.... Participating in Roddy's Celebration of Life this past Sunday was an awe inspiring event that makes one stop and realize that we don't have forever but what we do have we must seize and squeeze every delicious drop out of... as Roddy truly did... His courage and zest for life was truly inspiring and Rowena, his wife and his children will always carry his spirit with them... as we all do who were lucky enough to know him...

A dear friend Gini is fast walking the Big Sur Marathon for Tracy next month.  I'm amazed by her courage and blessed to know she walks for a cure.  Her team has raised a $100,000 which will fund a full time researcher for a year at Stanford.  Who knows?  He/ she may find T's cure!

My beloved brother, Johnny has received the best news!  He is in stage one so, tho' the treatment is rigorous it WILL stop the insidious cancer and hopefully, we'll all celebrate on the beach sometime soon.

Whenever I have had a heavy change of direction or attitude; I seem to mark the change by losing some piece of jewelry or favorite item of clothing... No surprise:  I seem to have lost my favorite sweater sometime over the last month plus.... sometimes I find those missing items... most times they're gone for good marking the change ... I hope my sweater finds its way back to me... it was one of a kind and a present from my hubby.


Posted by AnneMarie at 5:52 AM No comments:

No matter what happens we're on the right side of the dirt...and nothing makes any sense.... news of the third and I certainly hope the last passing Wednesday... dearest Carrie McCoid... much too young and recently widowed by a tragic traffic accident after which she gave birth to a gorgeous baby girl who turned 4 months on the day her mom passed away.... OMG!!!  So much tragedy!!!  How? Why?

I seemed to stumble through the day today... craving hugs and sharing stories...

Some great news:  Johnny is in stage one so, he's gonna kick this Cancer right outta the park!!!  He's not waiting for anything and he's studying the options and he'll get the cure on very quickly ...

I've been taking it slowly, walking on the beach with Tracy & Riley... reading, playing with clay and slowly taking on clients again.  I received 3 referrals last week from past clients and I've enjoyed house hunting again.  Solving the puzzle and seeing that satisfied grin and twinkle in the eyes of my clients makes it all worthwhile...  I'm a happy woman when I can help my clients achieve their dreams...

Tracy went to his day at Stanford last Fri without me (for the first time in 2 years).  I had been attacked by a stomach flu of some kind and I couldn't see my way clear of my bed and bath.  He survived the day and even brought the batch of my Italian wedding soup to Rowena and family.  I had planned it so that we could bring the soup and visit after Stanford but you know about best made plans...  Anyway, he's about the same, which is good according to Bruno.    We celebrated Tracy's birthday along with our two neighbors, Bina and Debi (all three houses on our block of Granada have one person with the Sept. 14th birthday- kinda woo woo ) and Judy's 9/7 and Jayne's 9/12 by throwing a block party on the 22nd and oh what a bash it was!!!  Lots of good food and drink and good vibes for all and it was a lot of fun to revive the block party (we'd taken a hiatus last year because T was soo ill ) ... the sheriffs even showed up and naturally, I tried to feed them... when offered the brownies they finally balked... hee hee

Love to you all and may you rest in peace Roddy, Evelyn and Carrie...
Posted by AnneMarie at 12:23 AM No comments: