Another week has elapsed and we're still in the dark... except that we now know definitively that Penn won't accept T unless he's relapsed.... and the bone marrow transplant can only be done if he's in remission... so there you go....  Penn was supposed to get in touch by tomorrow but we feel like that's a dead end for now.... T was given chemo yesterday and he's doing well.  Next Mon. will be the telling point..... bone marrow biopsy...

I, on the other hand, am crazed... between preparing for my tax apt. tomorrow and waiting for the phone to ring.  I am tired and cranky...

New listing at 1920 Maciel Ave. in Live Oak - a development opportunity at a little over 2 acres.


My Sereno office cleaned up the San Lorenzo river basin area in Santa Cruz on Sat. morning.  It was fun!  really quite surprised at the amount of cigarette butts but no needles... 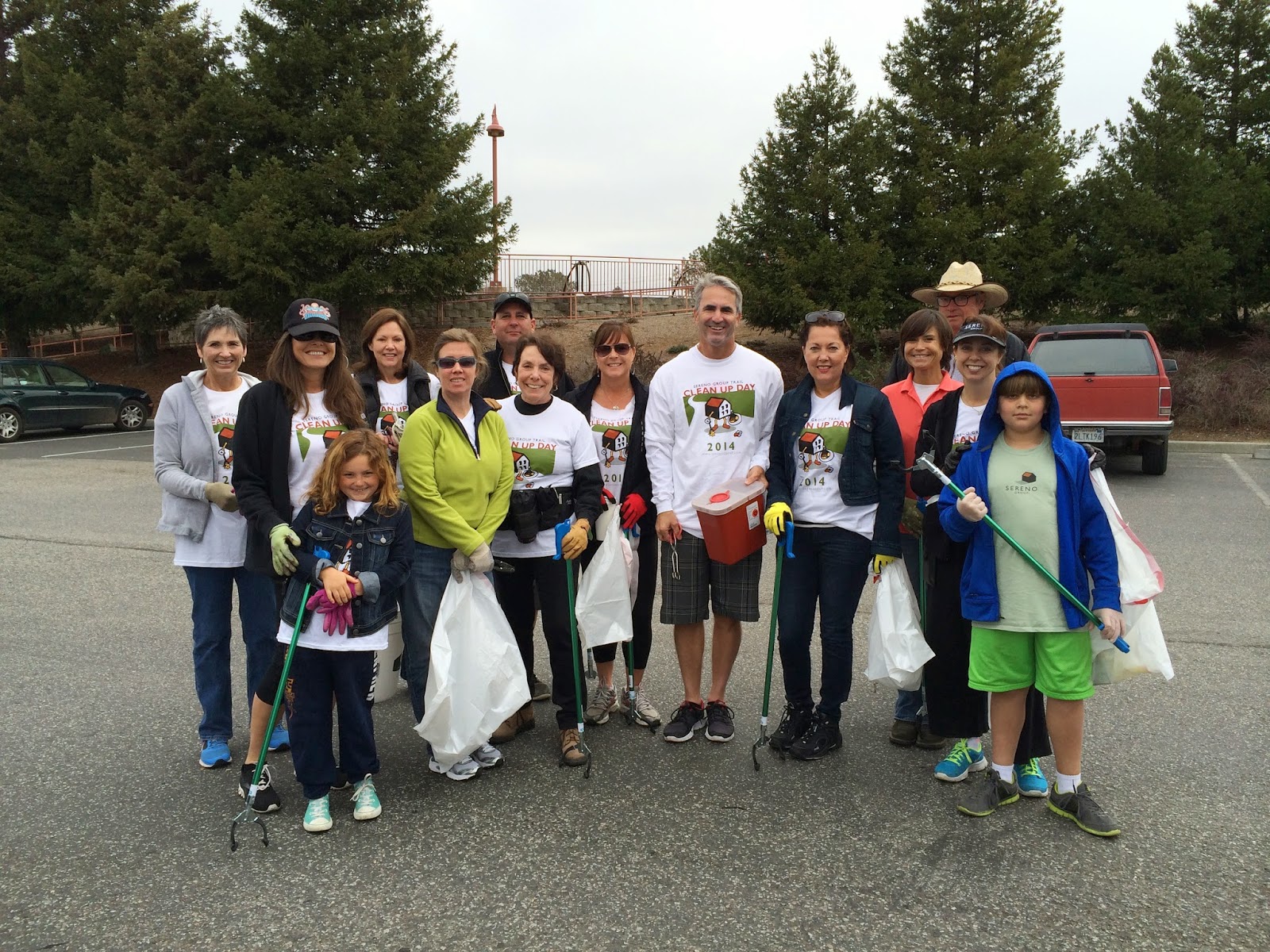 Spent the rest of the weekend preparing for my tax apt... argh!!!
Posted by AnneMarie at 5:10 PM No comments:

Argh....  no chemo on Mon.  Screwed up schedule by the coordinator and then, the trial guidelines would allow an infusion if T's liver numbers were 3x normal or up to 100.  T's were 108.  So, there we go another week down.  Frustrating, enervating and just plain depressing...

T's trying to keep a good attitude but it's not easy.

Had a nice weekend with a visit by the clan on Sat. night... they brought corned beef & cabbage and appetizers and desserts and we proceeded to play "Crimes against Humanity" and laugh our asses off....  as we consumed multiple cocktails... T was bartending and made a fab margarita!!!  T was on a roll cracking jokes and dropping some of the best lines in a humor duel with the Whit and the Reed...  It felt soooo good to relax and laugh!!!

We've been crazy trying to distract ourselves from the fact that we haven't heard from the Transplant folks or the Penn study.... so being the squeaky wheel... I finally decided to call Patrick the first person at Penn that I had spoken to and left a voicemail for him and then, I sent an email to the Dr.

Well, this morning about 7:30 we were called by a colleague of Patrick's verifying our number and saying that they'd tried several times to call to no avail....  she said that she'd 'reach out to the clinical administrator.'  and after I asked what time she thought she'd call by... she said she hoped it would be by 2:00 EST.  Well we waited... I passed on our sales meeting and we tried to keep our minds distracted.  I also left another message after our fax line rang (it reverses the last two numbers )... thinking perhaps they'd transposed our number.   Well, I just received an email from Patrick saying that they had been trying to call and had in fact transposed the number.  So, hopefully, tomorrow we'll actually talk to someone first thing in the morning.... 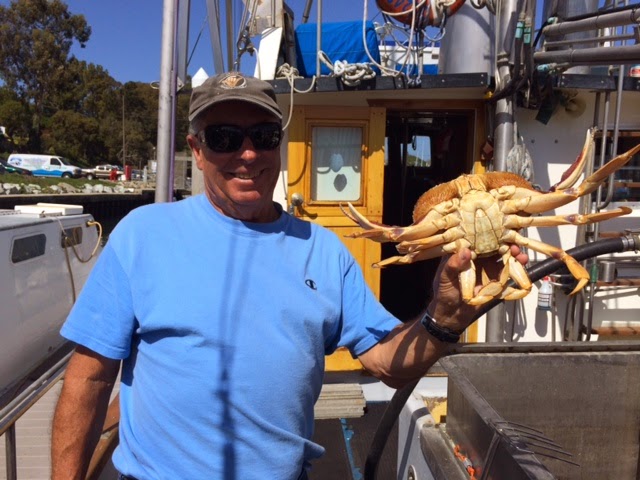 Here's our buddy, Frank with a dungeness beauty that landed in my cooler last Fri.  I couldn't resist....
Posted by AnneMarie at 4:01 PM 1 comment:

Another week has gone by.. we were assured Penn received T's file and told it's with the doctors.  We're awaiting word of a possible sibling match for the bone marrow transplant and we've finally decided that we have to increase our activities cause we're going stir crazy...

Having said that, yesterday T had his 2nd Inotusamab infusion and he's pretty punky.  The drs say he will continue on this drug until he either relapses or it's not effective... I guess that's pretty much the same thing.

So in the spirit of branching out... returning to life... we had dinner with the Halls at the Hindquarter on Sat. mmmm ribs and we took a ride up the coast Sun.  It was one of those gorgeous days filled with big puffy clouds as we loaded up the blue bomber with chairs, lunch and our pooch, Riley...even brought a book.  We returned to Scotts Creek, the source of T's unnamed virus back in 10/99 but we never ventured near the creek... the beach is easily accessible and not too far north of Davenport so, it was foreboding BUT we finally left those bad memories behind... 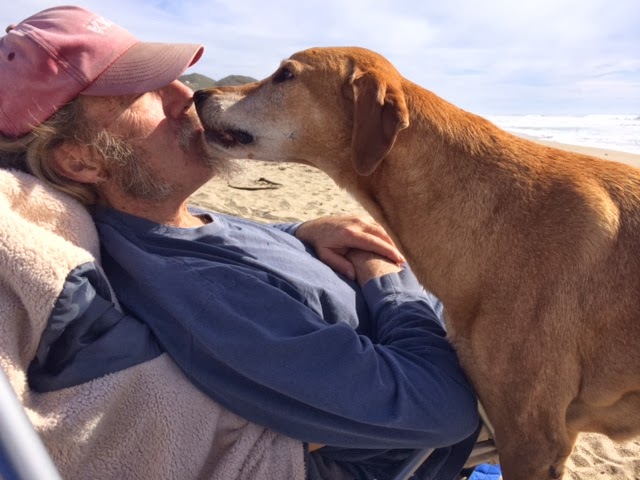 Interesting weekend... here are some photos from Rio Del Mar Beach at Platforms on Sat. 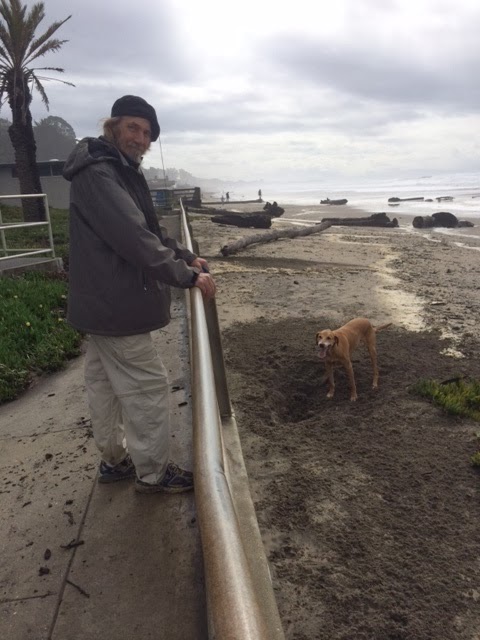 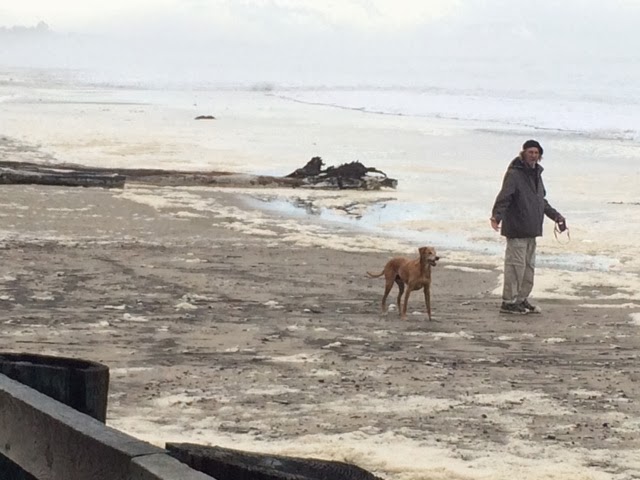 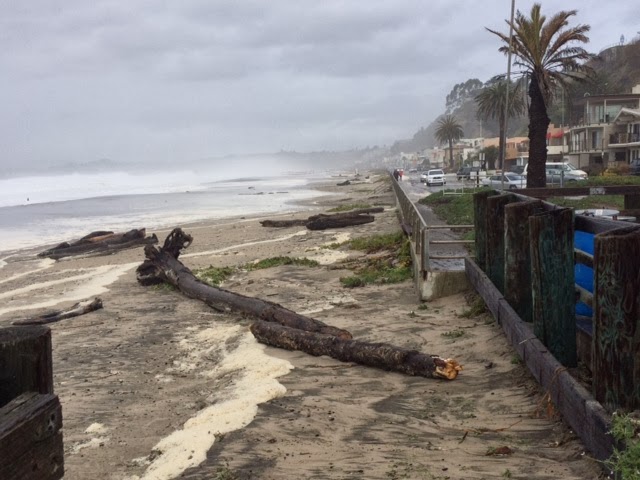 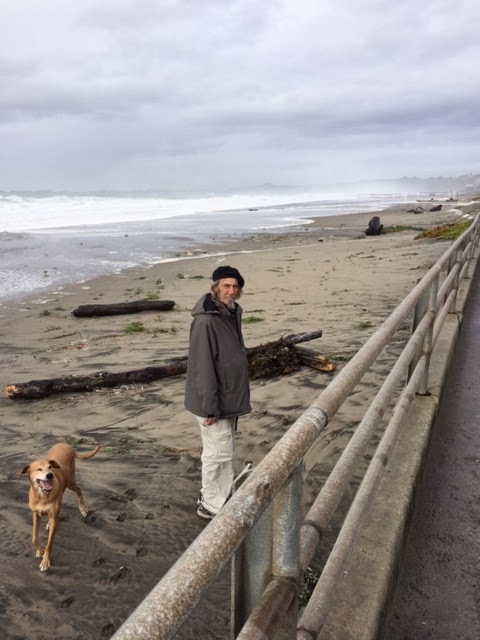 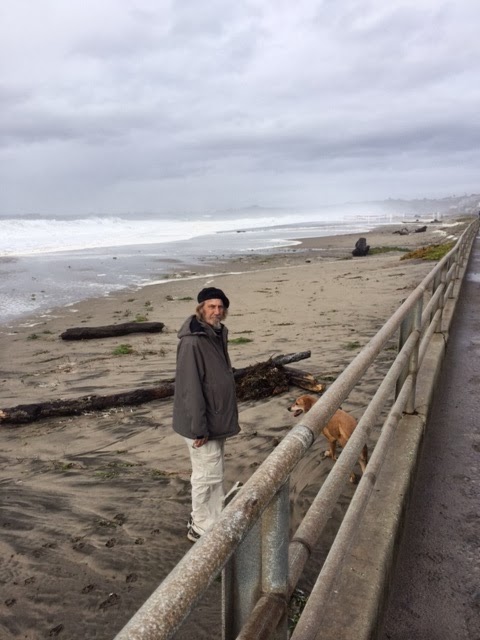 Tracy, Riley and I were shocked at the lack of shore and we kept having to run from the waves which actually crashed over the sidewalk in several places.  Fun adventure in between the raindrops.

I look forward to the annual award ceremony with all the glitz, glam and fun.  This year however, the Oscars were boring I'm sorry to say... I adore Ellen but she fell flat... the format wasn't her TV show and most of the gowns were just ok.  altho'  Kate Hudson, Jennifer Lawrence and Sandra Bullock were fab.  Gotta say the Jimmy Kimmel show with Kevin Spacey was way more entertaining than the awards...  I could watch Kevin for hours...  speaking of "House of Cards" is sooo good.  we're savoring it an episode at a time rather than last year devouring it all in 2 days.  Netflix streaming at it's best!!!

So, we're at Stanford again and we ran into Bruno when we arrived.  After a hug and a kiss, he responded with an "I told you so" when I related that I'd finally called Penn.  He's cautionary about it but when asked if it doesn't cure T, is transplant still an option, he said "absolutely".   All of this is so confusing but my gut still keeps telling me Penn is the solution.

So, due to problems with getting all the required paperwork prior to release of the chemo;  we wait as T dozes.  However, I've just been told that T's file has been sent to Penn. this morning.  Thank God for that!  I won't have to shoot anyone just yet....  only half kidding...

Anyway, keep the white light coming and don't be afraid to leave a comment... T & I love it!!!