Yesterday was a long and very interesting day.  I felt like I was walking towards a mirage and being guided all the way...  Neither one of us had clear vision but we have each other to lean on.  The day started way too early but T relaxed and went with the flow.  We took a walk after he had breakfast and I think, T actually enjoyed being the gentle masked giant... he has such appreciation for his surroundings... the art, the gardens and he asks about anything he doesn't readily understand.  It feels like he's been reborn and I 'spose that he really has been... Yesterday gave me great confidence that he will survive... He was infused twice with hemoglobin to counteract his low levels and then, finally received his hell shot and then, an infusion of platelets.  As fast as they give him blood transfusions;  they turn around and take blood away for testing.  If he hadn't had the PIC line, he wouldn't have any veins left to use.... BUT he seems to be tolerating the chemo.  We walked several times yesterday and they've told us that he needs to walk so, that his bowels and his lungs continue functioning.  We're going to learn every nook and cranny of Stanford hospital.

So, I left Tracy as the SF Giants started their game ... had homemade Italian soup at Deanna & Gary's Saratoga home where Carla met me and then, drove me home after the Giants WON!!!!!  Go Giants!!!

Thank you my friends for all the love and support!!!  We're overwhelmed but oh so thankful!!! 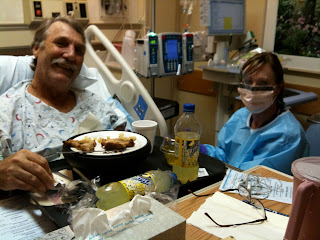