The 2nd year is much harder than the first.... true acceptance that T is NOT coming back and that I'm alone.  No one to call with that little thing that happened today or to commiserate over the elections or to be joyous about anything at all...  Most friends and family expect that I'm 'over it'.  That's just not the truth...  I miss him every day... I even miss the annoying stuff... our fights were spectacular altho' infrequent... but truly earth moving... we were so passionate about our opinions and our feelings.... I miss curling up with T most of all....

The Fall is upon us and I normally love the Fall... I am thankful to be able to see it.  I am thankful that I've been very successful this year by making many clients happy with their transitions... Phew!! Lots of work and thankful for it!  I am soo grateful for Riley and his constant companionship.

It's time for re-invention.  I feel it and I know it's time to take some steps.  Gradually, I'm dealing with T's clothes and his things... I'm taking baby steps cause each one is fraught with so much emotion and so many memories.  I know he'd want me to keep going and I'm putting one step in front of the other.

A little catch-up:  took a major step forward with a trip accompanied by Johnny, Shar and Jayne to our Dad's birthplace and the home of his birth which is his first cousin's home- still a Sorcinelli home (Yah they screwed up Dad's name at Ellis Island- Genezio Sorcinelli became John Sorcenelli)  in San Costanzo, Le Marche, Italy in Sept. 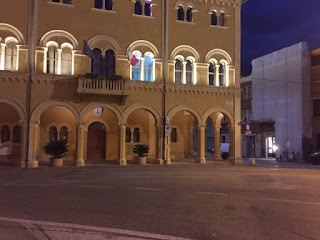 What a fabulous time with our family!!!!  Homemade pasta at lunch and dinner as the first piatti and then, multiple piatti of meat, chicken or fish and veggies and finished with homemade cannoli and always local wine for 4 days and 3 nights.  We saw the artistic side of Daddy's home town this time around.  Mauro married to Carla Sorcinelli was the 6 hr. a week volunteer in the tourist office since retiring from the Fano Tourist bureau.  Mauro knows everyone in his home town, Fano and everyone in San Costanzo... we went to the market in Fano and toured a local winery/farm  that is pioneering sustainable methods.  They grow Sangiovese grapes, wheat that is turned into pasta and olive oil so, they're able to keep their staff year round and they are family. 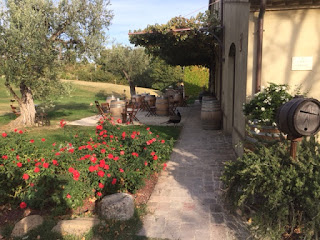 On our last evening we toured a historic museum after hours.  This was formerly the Prince's castle, Palazzo Cassi, until the town was bequeathed it around the turn of the last century.  A beautiful building that is totally surprising - upon entering you're struck by the bright white winding stairs that surround an elevator in the center... the stairs akin to the Guggenheim Museum in New York ... each floor contains different art or furniture or tools or a photography exhibit of the people of San Costanzo including 'Chano'- Eziziano Sorcinelli (Dad's first cousin) around the 40's I'd guess.  Another floor held the elaborate costumes worn to Carnival in Venice... complete with headpieces and props and footwear.  And the last floor held local artists work ... I fell in love with the work of Roberto Natale Patrizi and since I couldn't resist I asked if there were perhaps a print of 'Il paese dalla finestra' a scene where the view through the window from the artist's studio is San Costanzo or perhaps a website.   Mauro found a print in town by the next morning and I brought it home. 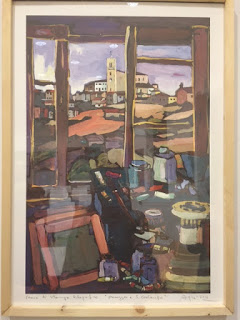 That was the beginning ....  next installment coming soon....
Posted by AnneMarie at 9:00 PM